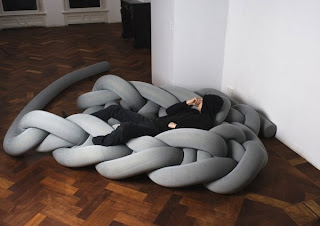 If you can’t make it good, make it big.

Or so the art-school saying goes. Dutch designer Bauke Knottnerus does both. Built from a collection of giant foam-filled threads, his Phat Knits are woven into furniture-like items. Chunky rugs appear ripped from a swatch of a giant’s sweater, while his unconventional seatingnresembles noodles from that same giant’s dinner plate.

“I’ve always been interested in scale, using basic stylistic ideas but with new proportions,” says Knottnerus. The tubes themselves are made industrially, but the large-scale knitting process can
take up to four people—and though it might sound like a joke-Knottnerus actually uses PVC needles up to 13 feet long and the same techniques one uses to weave garments.

Acknowledging the influence of Pop Art and Surrealists such as Magritte on his work, Knottnerus admits he enjoys the reactions his humorous pieces elicit.

“I don’t really see myself as a furniture designer. I’m more like a material designer,” he explains, citing his next project—creating multi-layered textiles for a fashion designer. “These things I make could end up as fur- niture or as textiles,” he explains. “It’s more like creating media that can be used to construct a coat or a carpet or a curtain.”

So it follows that Knottnerus’ shapes are intentionally ambiguous. “I like that unfinished part. It starts with a joke, but after that, it could be anything.”

I've done some knitting myself after reading a marvellous book about a wool shop in New York. I forgot the title...maybe I will remember that later. But anyway this knitting is something different! Love it.